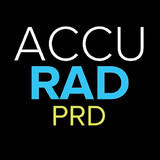 The AccuRad App is the companion mobile interface for the Mirion AccuRad PRD, and also the bridge between emergency responders on the field and Command or Reachback centers, providing real-time geospatial and radiological data relay so agencies can get access to the information they need, when and where they need it.
The AccuRad app can be used to connect and transmit device data to a variety of management software platforms, including RadResponder and SpirVIEW Mobile.
The app has a interactive training section including tutorials, how-to videos, and an evaluation module allowing the transmission of the scores and results to a training supervisor. The purpose is to aid in the operation and maintenance of the AccuRad PRD.
The app has an intuitive interface with basic navigation and a user-friendly menu, making it easy to view information, modify settings and set up remote reachback connections.
The AccuRad PRD complies with all relevant current international standards (IEC, IAEA, ANSI) for data sharing, which includes messaging and reachback connectivity (email, SMS, RadResponder).
The AccuRad personal radiation detector (PRD) is built to help first responders and law enforcement detect and locate sources of harmful nuclear radiation, to keep their people and the public safe. It’s the first PRD developed in close collaboration with in-the-field professionals, resulting in a world-class radiation detection device that works like they do – it\’s tough, consistent, and in it for the long haul.